Some data about the islands' fauna are almost a hundred years old while others are based upon oral reports which are very difficult to verify or even take seriously. However, during the last several years, there were some studies surveying the island fauna on the Kornati, done either by our scientists or by students from the Faculty of Natural Sciences and Mathematics.

There is no sense in alphabetically listing (like in a phonebook) all the known island species, but it would be good to name a few groups.

Insects:
Butterflies - eighteen species of butterflies has been recorded in the Park, with the brush-footed butterflies (Nymphalidae) dominating.
Ants - there are 35 species of ants in our Park! Imagine that! That the bleak karst has so many ant species...

Amphibians:
We have to be realistic, there are so many habitats on the Kornati that are not exactly welcoming to amphibians. Nevertheless, there is an adaptable land species living here, Green Toad (Pseudepidalea viridis/ Bufo viridis).

Reptiles:
Lizards - along with two species of wall lizards – Italian Wall Lizard (Podarcis sicula) and Dalmatian Wall Lizard (Podarcis melisellensis) – Mediterranean House Gecko (Hemidactylus turcicus), a nocturnal animal, also makes a living on the Kornati. It's interesting to note that the gecko has sticky toe-pads that make it possible for the animal to climb upside down on the ceiling or even on glass.

Snakes
We can say with certainty that there are four species of snakes on the islands – Montpellier snake (Malpolon (monspessulanus) insignitus), Four-lined Snake (Elaphe quatuorlineata), Balkan Whip Snake (Hierophis gemonensis), and Leopard Snake (Zamenis situla).
These snakes are not venomous! There's absolutely no record of venomous snakes in the Park.

Mammals:
This area is not exactly made for large predators (the terrain configuration, small size, limited food and water) but we can find marten on the Kornat Island. Martens probably succeeded in exterminating the Kornati hare population present until twenty years ago. Of course, we have to mention the ten species of bats found in the park, too. (We are not going to talk about sheep, donkeys, and cats here. They are a separate topic.)

Cave fauna:
Speleological geomorphology attracts great attention. Caves and holes as karst phenomena are important for the biodiversity of the area. Beside their own specific features, they can potentially contain a number of fauna rarities in their eco-systems (e.g. endemic species). Exploration has found very interesting stygobionts (subterranean water animals), both in the brackish layer and in the sea water of the deeper parts of the explored caves. Endemic species of amphipods, Niphargus pectencoronatae and Niphargus hebereri, are confirmed.

Finally, why are the Kornati difficult to explore (both flora and, particularly, fauna)? There are certainly many reasons, but we are going to talk about the terrain. For instance, you depend on a boat. The distance from the mainland is great (isolation). There is a large number of islands and islets. Most islands are difficult to access during winter, spring, and autumn. The configuration of the islands demands concentration and fitness, so you don't end in a hole with a broken leg. You have to spend several days on bigger islands if you want to walk all over them, and that demands carrying equipment (water, food, tent, sleeping bag) because you can never be sure whether the sea will allow you to leave the island just when you want to. 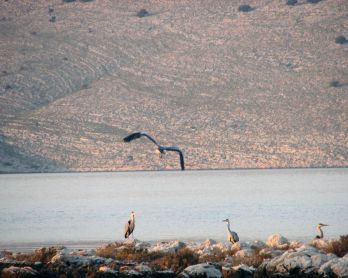